Recently there have been a number of developments affecting Thorpe Woods.

The group Extinction Rebellion has held a number of meetings with the aim of preventing the development from taking place in the woods.

FOTW was formed 10 years ago and has approximately 1000 local members.

The Friends welcome XR’s opposition to the development plans (#savethorpewoods) which would see 300 houses being built over a large area of local woodland.

We understand that the felling currently taking place in Thorpe Woods forms part of a long standing felling and replanting programme agreed by the owners with the Forestry Commission and is not part of the planned development work. That said, unless the owners (Thorpe & Felthorpe Trust) of the woods change their minds this damaging development will take place and hundreds of trees will be lost forever to be replaced by concrete and brick.

The Friends together with other interested groups are calling on Jerome Mayhew, the recently elected MP for Broadland and one of the Trustees and owners of Thorpe Woods, to reconsider their decision to build on this County Wildlife Site. As a member of the Conservative Environment Network, which exists to drive the green agenda in Westminster, we hope that he will listen to the strongly held views of local people and councillors and act to safeguard this woodland from destructive development.

This morning we received some very bad news regarding Thorpe Woods.

The planning inspectors decision has been published and unfortunately they have given consent to the application to build 300 houses over a large area of Racecourse Plantation.

The decision can be viewed by clicking on the planning inspectors link below.

The Friends will be consulting with Broadland District Council and the Norfolk Wildlife Trust about how best to respond to this shocking and very disappointing outcome.

Following the decision by Broadland District Council to turn down the application to build 300 houses over a large area of Thorpe Woods the developers, Socially Conscious Capital, appealed against the decision. As a consequence a public inquiry was held at the end of May 2018.

Since then we have been holding our breath for the planning inspectors decision, initially we thought that this may become available after a couple of months and then it was delayed until the 14th January.

As a consequence of ill health we now believe that the planning inspectors decision will be published on or before the 30th January.

We shall publish the decision as soon as we become aware of it.

For more information about the inquiry and rest developments please use the links below:

URGENT: Developers appeal against decision to refuse them planning permission

Last year The Friends of Thorpe Woodlands were pleased to hear that Broadland District Council had refused planning permission for the highly damaging plans being put forward by the developers Socially Conscious Capital to build 300 houses over a large area of this important County Wildlife Site.

In the last few days we have been informed by the council that the developer has appealed against this decision, once again demonstrating how they are not interested in the views of local people or their councillors.

The appeal will be heard by the Planning Inspector at a public inquiry.

The council continues to oppose this application as do conservation bodies such as the Norfolk Wildlife Trust.

As someone who cares about these woods and the wildlife that relies upon them you have an opportunity between now and the 10th January to send your comments to the Planning Inspector
Details of the developers appeal can be viewed by clicking on the link below:

How to oppose the appeal

If you would like to make a comment opposing the plans you can either write to the planning inspector or send your comments via their online portal which can be accessed by clicking on the following link and follow the instructions, identifying yourself as an interested party:

If you would like to send a letter to the inspector you should include your name and address; the Planning Inspectorate appeal reference number which is APP/K2610/W/17/3188235 and the address of the appeal site which is:

and say ‘I am against the appeal proposals’ and explain your own reasons, this may include:


Use black ink If possible and please send 3 copies.

Copies of your representation will be sent to the appellant, to any statutory parties and to the local planning authority.

Please send your letter to:

Your comments can make a big difference so please help us to continue to protect these woods by making clear to the planning inspector that you oppose any development in Racecourse and Belmore plantations.

Thank you and happy New Year.
Posted by Jason at 06:28 No comments:

Kensington and Chelsea Deputy council leader Rock Feilding-Mellen who managed Grenfell Tower refurbishment has been identified in the EDP as the owner of Socially Concious Capital, the development firm that has been trying to develop an unwanted housing development in the middle of Thorpe Woods.

Mellen has repeatedly ignored the view of local people and councillors whilst promoting his plans to build a highly damaging housing estate in the middle of a much loved County Wildlife Site situated in Thorpe St Andrew on the edge if Norwich.

Click on the link below to read the article in the EDP:

Broadland District Council has published its refusal of the latest planning application to build a housing development over a large area of Thorpe Woods.

The woods are a County Wildlife Site and fall outside of the area identified by the council as being suitable for development.

The full decision can be viewed by using the following link:

The property developers Socially Concious Capital have made no comment on the refusal or on whether they plan to appeal against it.

Creating Public Footpaths in Thorpe Woods – Can you help

lornacbeckett@yahoo.co.uk
Thank you
Posted by Jason at 10:33 No comments: 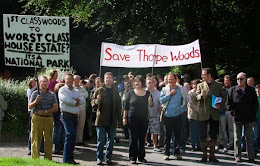